Tremors a cold day in hell 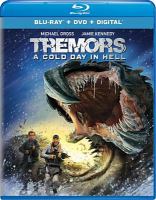 Blu-ray
Burt Gummer and his son Travis Welker find themselves up to their ears in Graboids and Ass-Blasters when they head to Canada to investigate a series of deadly giant-worm attacks. Arriving at a remote research facility in the arctic tundra, Burt begins to suspect the Graboids are secretly being weaponized, but before he can prove his theory, he is sidelined by Graboid venom.