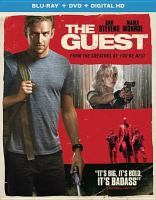 Blu-ray
The Petersen family welcomes into their home David Collins, a recently-discharged soldier who claims to be a friend of their late son, only to have a wave of violence begin soon after his arrival.