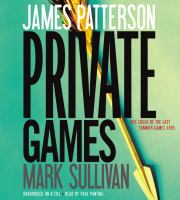 The 2012 Olympics are hours away when a high-ranking member of the games' organizing committee and his mistress are killed. A man calling himself Cronius writes a letter to newspaper reporter Karen Pope, claiming responsibility for the murders and threatening that more will die unless he can restore the Olympics to their ancient glory. Now, with private investigator Nigel Steele, Pope sets out to uncover the madman's real identity before more die.