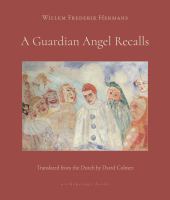 ""One of the most beautiful novels that I've written." - Willem Frederik Hermans Alberegt, a public prosecutor and self-proclaimed "man of minor failings," speeds through Hook of Holland in his black Renault on May 9, 1940. His every move is guided by the cool and patient hand of a guardian angel. Flitting about from the hood of Alberegt's car to the rim of his windswept hat, the angel attempts to quell their unhappy ward's fears and secrets. (On occasion the heavenly narrator is so ashamed of Alberegt that they cover their own face with guardian wings.) The angel, musing for just a moment on the greater suffering of mankind, forgets a frenzied and lovelorn Alberegt at the wheel and Alberegt swerves into a small child crossing the road. This fatal event, on the eve of Nazi occupation of the Netherlands, spins the novel into a nightmare in which even expressions of empathy and humanity are edged out by cynicism and cruelty. Reminiscent of Georges Simenon, Albert Camus, and Kurt Vonnegut, A Guardian Angel Recalls is a brilliant and unnerving masterpiece"--