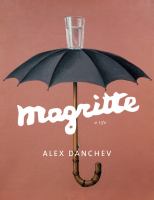 "The first major biography for our time of Renڳe Magritte, from the celebrated biographer of Braque and Cڳezanne. In this stimulating life of Renڳe Magritte (1898-1967), Alex Danchev makes a case for the artist as the single most significant purveyor of images to the modern world. His surreal sensibility, his deadpan melodrama, and his fine-tuned outrageousness have all become inescapably part of our times through legendary works such as The Treachery of Images (we know it as Ceci n'est pas une pipe), and through his iterations of the man in a bowler hat, raining down in multiples from the sky, or with an apple where his face should be. These pathbreaking subversions all came from a middle-class Belgian gent, who kept a modest house in a Brussels suburb; who led a small, brilliant band of Belgian surrealists, and famously clashed with Andrڳe Breton; whose first one-man show, in the style he famously dubbed "Vache" ("Cow"), sold absolutely nothing. In 1965 a major retrospective traveling throughout the United States gave birth to his international reputation. Using thirty-two pages of color inserts and black-and-white illustrations throughout the text, Danchev explores the path of this highly unconventional artist who posed profound questions about the relationship between image and reality and the very nature of authenticity. Danchev delves into a deep examination of Magritte's artistic development, surveys his intimate friendships, and plumbs the mystery of an iconoclast whose influence can be seen in everyone from Jasper Johns to Beyoncڳe"--