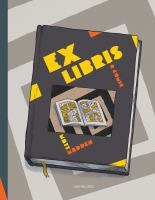 "Ex Libris revolves around a character trapped in a room with nothing but a futon and a bookcase full of comics. As they peruse covers, read stories and fragments of stories, they begin to suspect that the comics contain hidden messages and... a threat. Fiction and reality blur; sanity and madness become increasingly intertwined as the reader becomes convinced the key to their predicament is to be found between the panels of the strange books. With a dizzying array of inventive visual and narrative styles, Ex Libris continues the line of exploration and play that Madden initiated with 99 Ways to Tell a Story: Exercises in Style. Ex Libris is a tribute to the meta-fictional tradition of writers like Jorge Luis Borges, Julio Cortázar, Vladimir Nabokov, and Italo Calvino (whose novel, If on a Winter's Night a Traveler, was the inspiration)." --Amazon.com.