Thanks to Frances Perkins : fighter for workers' rights / written by Deborah Hopkinson, illustrated by Kristy Caldwell. 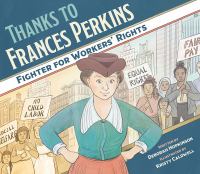 Book
Sometimes, one moment changes a person's life. And that person goes on to change other lives. That's what happened to Frances Perkins. After she witnessed the 1911 catastrophic fire at the Triangle Waist Company, in which one hundred and forty-six people died, she devoted her life to improving conditions for workers. Frances became the first woman to serve in a president's cabinet. As Secretary of Labor under President Franklin D. Roosevelt, she helped pass new laws like the 1935 Social Security Act, part of Roosevelt's New Deal. Today, millions of Americans depend on Social Security benefits. Today, we can thank Frances Perkins for her dedication to the ideal of society where no one is left out.