She was the first! : the trailblazing life of Shirley Chisholm 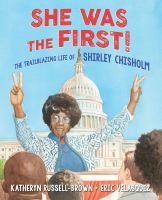 "A picture biography of educator and politician Shirley Chisholm, who in 1968 was the first Black woman elected to Congress and in 1972 was the first Black candidate from a major political party (the Democratic party) to run for the United States presidency. An afterword with additional information, photographs, and source lists are included." --
"A timely, inspiring picture book biography of the dynamic twentieth-century educator, activist, and politician Shirley Chisholm.Even as a young child growing up in the 1920s, Shirley Chisholm was a leader. At the age of three, older children were already following her lead in their Brooklyn neighborhood. As a student at Brooklyn College, Shirley could outtalk anyone who opposed her on the debate team. After graduating, she used her voice and leadership to fight for educational change. In community groups, she stood up for the rights of women and minorities. Her small stature and fiery determination often took people by surprise. But they listened. In 1964, Shirley took her voice and leadership to politics, becoming the first Black woman elected to the New York State Assembly, and in 1968, the first Black woman elected to Congress. Then in 1972, she became the first Black woman to seek the presidency of the United States. She pushed for laws that helped women, children, students, poor people, farm workers, Native people, and others who were often ignored. She fought for healthcare. She spoke up for military veterans. She spoke out against war. Shirley Chisholm, a woman of many firsts, was an unforgettable political trailblazer, a candidate of the people and catalyst of change who opened the door for women in the political arena and for the first Black president of the United States." --Amazon.com.