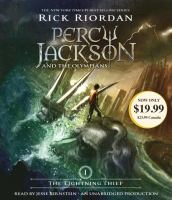 Twelve-year-old Percy Jackson learns he is a demigod, the son of a mortal woman and Poseidon, god of the sea. His mother sends him to a summer camp for demigods where he and his new friends set out on a quest to prevent a war between the gods.