Kidnapped : being memoirs of the the adventures of David Balfour in the year 1751 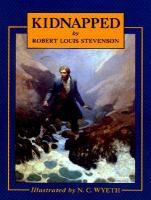 Book
A sixteen-year-old orphan is kidnapped by his villainous uncle, but later escapes and becomes involved in the struggle of the Scottish highlanders against English rule.